Robert Kraybill on ‘Scaling up blended finance in developing countries, LDCs and SIDS: Challenges and opportunities’

Mr. Kraybill provided insights into the place of impact measurement, monitoring and transparency in blended finance transactions, in particular on the opportunities and challenges they pose to developing country partners.

END_OF_DOCUMENT_TOKEN_TO_BE_REPLACED 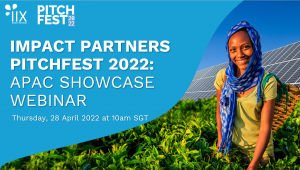 Impact Partners PitchFest 2022 kicked off with the APAC region. We received up to 200 applicants and we are excited to share with you the exceptional enterprises that have managed to impress the judges with their world-changing solutions to economic growth with a gender lens.

We hope that through the access and support gained from this event, these enterprises are equipped to scale their impact on the world.

Congratulations to the Impact Partners PitchFest 2022 – APAC winners and finalists!

END_OF_DOCUMENT_TOKEN_TO_BE_REPLACED 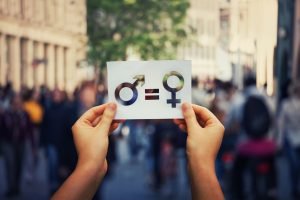 Can orange be the new green? The answer is a resounding yes for supporters of orange bonds, a growing asset class focused on gender lens investing as a form of sustainability financing to narrow the gender gap and improve women’s equality.

February 24, 2010 News
Asia is the birthplace of several successful and large Social Enterprises (SEs) such as Grameen Bank, BRAC and PDA. While extensively covered in the media, these entities are the exception rather than the norm. These SEs were, and some remain, lucky to receive unquestioned government and donor support. Not all the SEs in Asia is in the same position. Unfortunately most of the SEs are mid-sized; with neither have the unlimited access to capital nor the required recognition of their impactful work. At the same time, SEs in Asia operate within contexts that, while impossible to generalise across the whole region, provide some unique opportunities for growth.

END_OF_DOCUMENT_TOKEN_TO_BE_REPLACED

As Wharton’s first Bangladeshi alumna, Durreen Shahnaz, WG’95, strives to make her alma mater proud – and to make an impact as a social entrepreneur and professor.

What is your occupation?
I wear two hats: one as a social entrepreneur and the other as a professor. I am the Founder and Chairperson of Impact Investment Exchange—a social stock exchange in Asia. Additionally, I am Associate Professor and Head of Programme on Social Innovation and Change at the Lee Kuan Yew School of Public Policy at the National University of Singapore.

END_OF_DOCUMENT_TOKEN_TO_BE_REPLACED

IIX in the News in Italy

END_OF_DOCUMENT_TOKEN_TO_BE_REPLACED

Durreen Shahnaz, founder and chairperson of Impact Investment Exchange Asia, was the keynote speaker on December 12 at the Annual Stree Shakti Awards and book launch by Minister of Tourism Kumari Selja in New Delhi, India.

Stree Shakti-The Parallel Force, is a platform for the convergence of grassroots efforts, scientific research, creative ideas and enterprise and a collective voice of women seeking justice and equality.

END_OF_DOCUMENT_TOKEN_TO_BE_REPLACED

Durreen Shahnaz, the founder and chairperson of Impact Investment Exchange Asia, was named a 2010 TED Fellow  in recognition of her work with IIX. TED is a nonprofit organization devoted to “Ideas Worth Spreading.”

Shahnaz is among the 25 global TED Fellows who will participate in TED2010, the annual conference Feb. 9-13, in Long Beach, California, which invites the world’s leading thinkers and doers to speak and then makes their talks available at TED.com.

END_OF_DOCUMENT_TOKEN_TO_BE_REPLACED

The Programme on Social Innovation and Change (PSIC), headed by Professor Durreen Shahnaz, introduced a research project on “Measuring Social Impact” on October 7, 2009. The workshop included  the ecosystem of social investing — a group of investors, lawyers, government officials, academics, and representatives from rating agencies and social enterprises.

END_OF_DOCUMENT_TOKEN_TO_BE_REPLACED

A place in society

You might suppose that financial innovation had done enough damage. But bankers, investors and philanthropists believe it can help the world’s poor

MANY nodded when Lord Turner, the City of London’s chief regulator, said recently that the financial industry had grown “beyond its socially useful size”. The idea that devices such as collateralised debt obligations and credit-default swaps have been a blessing, not least by allowing the less well-off to buy houses, is in tatters: lots of those new homeowners have lost their houses as well as their jobs. It is remarkable, then, that the crisis should have given fresh impetus to “social finance”, a movement based on the belief that financial innovation can be used directly to help society’s neediest people.