“Private bankers are becoming irrelevant,” Durreen Shahnaz, founder, Impact Investment Exchange (IIX) boldly says, because she believes Asian investors, yield-oriented though they may be, want more out of their wealth managers. “They are out of touch with their client needs and wants.” 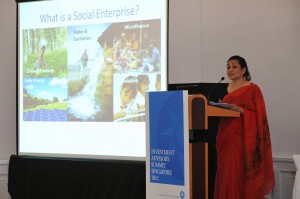 “Clients are looking beyond traditional asset classes,” says Shahnaz, referring to HNW and UHNW clients’ interest in impact investing, an increasingly prominent space for investors who look not only to gain financial returns, but also social and environmental returns – the impact investment triple bottom line.

Citing a 2011 figure in reference to the World Bank poverty threshold, Shahnaz says, “Reality is an Asia we are living in – not Hong Kong, not Singapore, not Seoul, not Tokyo – but in the rest of Asia which has 754 million people living on less than US$1.25 a day.”

An ex-Morgan Stanley investment banker turned Grameen Bank microcredit lender, Shahnaz was motivated by the frustration of defaulting microcredit borrowers who could not access markets, effectively lacking the liquidity required for growth. IIX looks to set up a model in the mirror image of stock exchanges, for investments in sustainable businesses with that accomplish goals beyond profit.

From organic farming, water and sanitation operations, solar energy, education to Shahnaz’s alma mater and US$50 billion industry, microcredit, the IIX aims to provide a platform for liquidity to reach social enterprises, defined as mission-oriented for profit, such as sustainable energy companies, or non-profit business-oriented companies such as charity organisations.

Pointing to the investment markets sizes of environmental, social and governance-focused (ESG) organisations; socially responsible investing and; the US$1 trillion forecast of the size of impact investments by 2015, Shahnaz highlights the shift in the interest towards making a change via financial markets. In fact, social entrepreneurship and value-based investing were ranked as the number one interest by 36% of respondents in a recent survey regarding philanthropy trends.

The impact investment space is already making headways with many projecting positive forecasts in the market. JP Morgan projects a profit opportunity of US$136 to US$667 for impact investors over the next decade, including a market potential of US$7 billion to US$21 billion for SEs involved in clean water and sanitation in Asia.

IIX hopes to provide a platform for the liquidity to reach SEs in a financially sound manner.

The IIX attempts to connect impact investors and SEs through three platforms. Impact Incubator attempts to help SEs in their seed stages to help access capital; Impact Partners is a platform for investors to be introduced to a pre-screened selection of SEs according to investment criteria and; the Impact Exchange which will function similar to a regular stock exchange, complete with listings of SEs in a market of equities and bonds alongside financial reporting requirements and continuous market data feed.

Interestingly, the shift is occurring in one other way: how the wealthy today are building their legacy.

“HNWIs are coming to us to talk about leaving a legacy behind. And they are no longer interested in giving only an endowment to a university or having a building named after them – that kind of legacy has become a little passé.” says Shahnaz. “They are looking for something that will have a multiplier effect – it will not only create enormous positive social impact but the act will also help them connect with the next generation.”

The effort will require the collaboration with numerous organisations to build infrastructure, research and advocate, including Shujog, a division of the IIX which aims at providing initiatives, advocacy and research to raise awareness and understanding of SEs and impact investors. The role of private banks will be to act as intermediaries to impact investors to catalyse the space with efforts which include the creation of funds to mobilize institutional-scale investments or the development of dedicated impact investing banking facilities.

“It took us over 700 years,” Shahnaz concludes, referring to what is considered the world’s first s stock exchange, Ter Breuze founded in Belgium in 1400, “to realize that stock exchanges could do more than just make money.”