Running with the theme of ‘Our Impact Story’, the Impact Quarterly set out to interview Mr. Robert S. Harrison who shared Clinton Global Initiatives and his impact story. 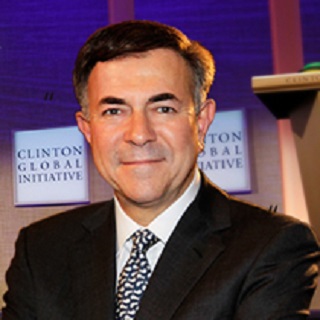 Robert S. Harrison is the chief executive officer of the Clinton Global Initiative (CGI). Previously, he was the executive director of the Clinton Foundation’s childhood obesity initiative. Before joining the Clinton Foundation, Harrison spent 22 years on Wall Street as an investment banker and attorney. He joined Goldman Sachs in 1987, where he became a partner in the firm’s investment banking division and global co-head of its Communications, Media, and Entertainment group. From 1981 to 1987, Harrison practiced corporate law in the New York and Paris offices of Davis, Polk and Wardwell. Harrison is chairman of the board of trustees of Cornell University, a director of the Association of American Rhodes Scholars, and honorary chairman of the board of the Henry Street Settlement. He received a BA in government from Cornell University, a BA/MA in politics, philosophy, and economics from Oxford University, where he was a Rhodes Scholar, and a Juris Doctorate from Yale Law School.

As CEO, could you share with our readers the story of CGI, how the organization started and its unique model?

When President Clinton first launched CGI in 2005, it was as an experiment of sorts. Over his three decades in public service, he had attended a number of events and conferences around the world. He appreciated the fact that these gatherings brought together important people to discuss significant issues, but there was one glaring problem: No one was asked to do anything. There were a lot of conversations, but not a lot of action.

So, President Clinton conceptualized CGI as an opportunity to bring together the most influential people in the world from every sector of society to discuss what he identified as the greatest global challenges and to come up with and commit to the solutions. CGI started addressing a handful of topics and has since expanded to nine, which range from Education & Workforce Development, to Environmental Stewardship, to Global Health.

President Clinton imposed a requirement on becoming a member of CGI — that everyone must make a commitment to do something about at least one of those challenges. These Commitments to Action are the defining feature of CGI. And they have yielded tremendous results: To date, members of the CGI community have made more than 3,100 Commitments to Action, improving the lives of over 430 million people in 180 countries.

How has CGI been able to align to its mission since inception in 2005?

CGI started with an Annual Meeting but it has evolved to something more comprehensive and powerful than anyone, including the President himself, could ever have imagined. One thing we do now that we didn’t in the beginning is offer a year-round membership experience, which allows our members to build relationships with each other and develop partnerships to amplify the impact of their CGI commitments.

We have also expanded beyond the Annual Meeting. Now, CGI also convenes CGI America, a meeting focused on ways to expand economic recovery in the United States, and CGI University, which brings together college students to get them involved in solving global challenges while they’re young. We’ve also expanded to other geographical regions through CGI International, bringing the commitment-making model to Asia, Latin America, and elsewhere.

What according to you, is the biggest role that CGI has played in the global development story?

Many of the challenges we face in the 21st century can’t be fixed by government alone. NGOs or foundations won’t fix them by working in silos. Cross-sector partnerships are needed if we’re going to make any headway on our most urgent problems, whether it’s poverty alleviation or climate change.

I’m proud of the role that CGI has played in getting the private sector to increase its commitment to being good global citizens as part of their core business, and in getting business, government, and society to trust each other a little more and work together. I think there’s something to be said for President Clinton’s vision of bringing the efficiency and innovation of the private sector to the difficult business of creating a better world.

In 2014, CGI worked with the theme of ‘Reimagining Impact’. Could you shed some light on what the theme achieved and the way forward? For 2015, what is the impact that CGI is aiming to achieve?

In 2014, we started our march towards CGI’s 10th anniversary, which we’re commemorating this year. With the theme “Reimagining Impact,” we asked our members last year to reimagine what they can accomplish through CGI’s model, and to take stock of their progress and challenges over the last decade. On our end, we worked with Palantir, a CGI member, to analyze our portfolio of Commitments to Action to get a better grasp on how CGI members are improving lives around the world and what we can all do better.

Through the review of our data, we learned some important things about our members’ commitments – lessons that have implications for the future of global philanthropy and development. For example, we learned about the power of collaboration: We found that among our commitments, the percentage of partnerships between the private sector and NGOs has more than doubled since 2005. This is encouraging, because we also found that commitments that were born from partnerships were more likely to reach and exceed their goals than commitments made by a single member.

As far as what’s ahead, I’m really looking forward to this year’s CGI Winter Meeting, where the President will announce CGI’s theme for 2015 and kick off our organization’s busiest year to date. In addition to convening CGI University in Miami, CGI America in Denver, and the 10th Anniversary Meeting in New York City, CGI will also hold two new meetings overseas this year – a meeting of CGI Middle East & Africa in Marrakech, Morocco, and CGI Mediterranean in Athens, Greece. We will also convene our first meeting focused on generating commitments to address a single issue – Managing Our Oceans – in Boston.

This year, we are particularly excited to see how CGI members respond to the new Calls to Action Secretary Clinton announced at our last Annual Meeting, which will drive commitment-making around four specific challenge areas: the Ebola Outbreak in West Africa, Energy Poverty, U.S. Food Insecurity, and Water Scarcity. So we have much to look forward to, and of course, a lot of work to get done along the way.

CGI’s mission is for members to use our platform to learn, network, and then commit to solving global challenges. CGI members have made several commitments and developed partnerships in the impact investing field, including the Global Impact Investing Network, the Aspen Network of Development Entrepreneurs, Blab, and Social Finance. These are exciting new ways to engage investors in partnerships with entrepreneurs and intermediaries they may not otherwise have considered before. Given CGI’s broad membership, we think it’s important that there remain a role for philanthropy to help build the field of impact investing. Institutional investors are starting to play an ever bigger role in this space and designing vehicles to engage mainstream financial players. We have seen our members launch several new funds in the last couple of years. As they find more ways to engage wealth managers and financial advisors within their organizations, impact investing should really take off.

What, in your opinion, would help the impact investing space grow to its potential?

Family offices, high net-worth individuals, and impact investors who invest in early-to-growth-stage enterprises play an essential role in this field by helping support socially or environmentally responsible enterprises and scale them to the point of becoming suitable for institutional investors. Financial advisors and wealth managers who understand impact investing and engage their clients in a responsible manner show great potential to scale this field.

Given your vast experience, could you share with our readers your inspiration, your goals for the future, and your impact story?

Before coming on board, I was optimistic that the Clinton Foundation could be a place where I would be challenged, but would tackle very different issues and make a different kind of impact than I had ever been able to before. In my eighth year as CEO of CGI, the effectiveness of our members, the dedication of our energetic staff, and the leadership of the Clinton family have exceeded my expectations.

The experiment that President Clinton launched 10 years ago is making a huge impact, and I am proud to have worked with so many members who’ve made incredible changes around the world.