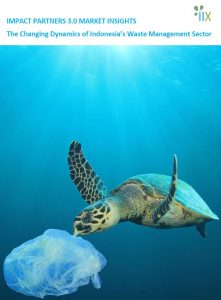 Did you know that waste mismanagement poses a higher risk to oceans and rivers? Well-managed waste streams eliminate almost all risks of plastic waste ending up in the ocean.This means that when considering pollution from waste, per capita waste generation numbers are not the most effective metric to consider.

Indonesia is a unique case, producing more plastic than any other country in the region, despite being just one-fifth the size of China and having a population of ~300 million, 80% less than that of China.

Needless to say, Indonesia’s waste management sector faces many problems across its entire value chain. It is estimated that approximately 800,000 tons of plastic waste could leak into the ocean by 2025 if no action is taken, threatening the biodiversity of the region. As the momentum for climate action gains traction globally, the Indonesian government has vowed to reduce plastic waste by 70% in the next five years leading to a catalytic change within Indonesia’s start-up landscape.

The sector has traditionally been dominated by informal work, government organizations, recycling companies, and a handful of NGOs. However, despite efforts to increase recycling rates, the rapid growth in population, urbanization, and changing consumer habits have halted progress. In addition, a lack of education amongst households and low community engagement only meant that waste management could not progress quickly.

The waste management value chain in Indonesia has long been resource-intensive. A large number of waste pickers scavenge waste heaps in the hopes of finding high-value products. The lack of accountability, aggressive competition amongst waste pickers, and a lack of sorting facilities meant unsteady incomes for the waste pickers while leaving the recycling companies at the behest of plastic importing companies.

On top of this, a lack of accountability and traceability is coupled with unethical practices of slavery and middlemen that exploit waste pickers, often children, prevalent across the supply chain.

Just two years ago, Indonesia had only a handful of technology start-ups focusing on waste management.  Since 2020, there has been a tremendous increase in the number of tech-enabled start-ups, specifically with an emphasis on ensuring a circular economy, and in educating and engaging the communities. This has completely changed the dynamics of waste management in Indonesia.

Now, there are 30 start-ups in tier 1 and tier 2 cities across the country. These tech-forward enterprises use mobile applications, blockchain technologies, and actively engage the ecosystem across the community, transforming how waste is sorted, stored, and recycled in Indonesia. The sector now boasts multiple community-based organizations that previously relied on grants pivoting their business models to become investment-ready.

New start-ups in Indonesia have transformed the waste management sector through:

By 2025, the market for recycled products is expected to hit USD 4.5 billion in Indonesia alone, providing a lucrative market for both companies and investors alike. The success of Indonesia’s waste management start-ups means investor interest is only expected to increase in the near future, especially given the quantum of support that the sector has been witnessing from Government agencies, international organizations, and even local celebrities who are all rallying toward a more sustainable Indonesia.


Head over here to read the full report and get in on the action with IIX Impact Partner’s live deals in the waste management sector in Indonesia.